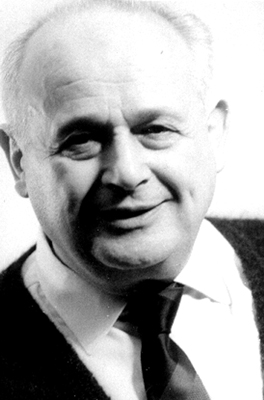 Moshe Feldenkrais was a physicist and the founder of the Feldenkrais Method®, designed to improve human functioning by increasing self-awareness through movement.

Feldenkrais was born in the Russian Empire (present-day Ukraine). He left his country early on and while living in Palestine he began his studies of self-defense, including Ju-Jitsu. A soccer injury in 1929 would later trigger the development of his method. During the 1930’s he earned his engineering degree in France, and later his Doctor of Science in engineering. In 1933, he met Jigoro Kano, the founder of judo, and earned a black belt in judo three years later achieving his 2nd degree black belt in 1938. After he re-aggravated his old soccer knee injury in the 40s, he refused an operation, instead exploring and developing very specific techniques of self-observation and tools for self-rehabilitation. This later evolved into the Feldenkrais Method® and became a life-long exploration of the relationship between movement and consciousness.

In developing his work Moshe Feldenkrais studied, amongst other things, anatomy, physiology, child development, movement science, evolution, psychology, a number of Eastern awareness practices, and other somatic approaches. He was the author of several books.

In 1954 he settled in Tel Aviv where he began to teach his method full-time. Throughout the 1960s, 1970s, and into the 1980s he presented the Feldenkrais Method® throughout Europe and in North America. He also began to train teachers in the method so they could, in turn, present the work to others.